What is roller derby in 10 bullet points

3. Two teams of five members skating in the same direction (counter-clockwise) around an oval track 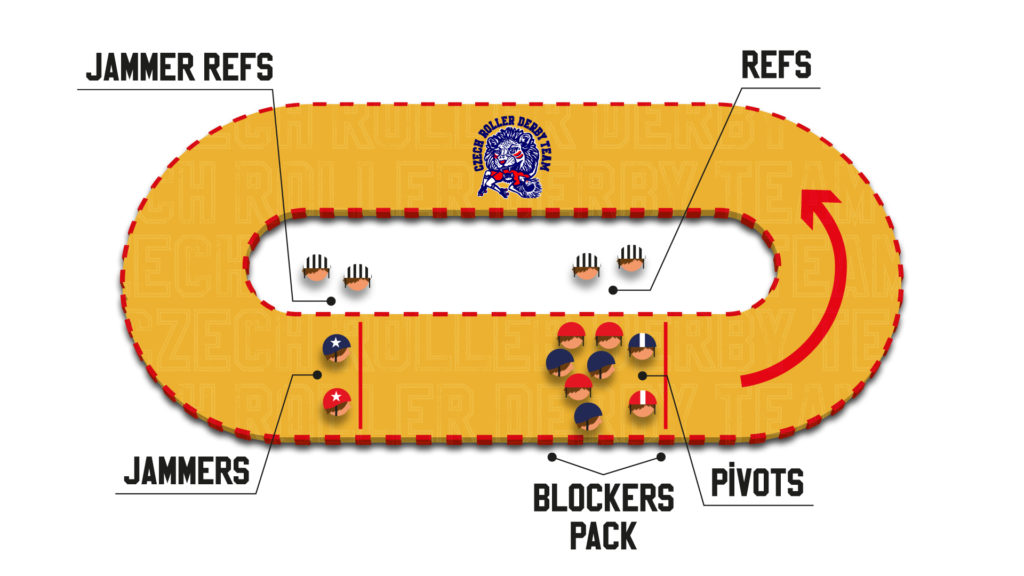 5. Each bout consists of multiple jams. A jam is a 2 minute period in which teams attempt to score points.

6. In between jams is a 30 second break in which teams can change their players on track and send a new (fresh) jammer for the next jam.

Jammer – the jammers must skate and muscle their way through the pack (group of blockers) and completely exit it to gain the ability to score points. Once the jammer fights her way out of the pack, she then races around the track in order to lap the pack. At this point, each time the jammer passes a member of the other team, she scores one point for her team. The first jammer that legally passes through the pack first wins the status of lead jammer. Lead jammer can call off the jam by tapping her hips twice. This can happen before the 2 minutes ends.

Pivot – is a blocker – her helmet cover has a stripe. If the jammer has a problem getting through the wall of blockers, the jammer can pass her helmet cover (star) to a pivot. This is called „star pass“. At this point the Pivot becomes a Jammer and tries to make her way throught the pack and score points.

8. There are many rules that regulate the game. If any players break any rule – she receives a 30 seconds penalty and has to leave the track immediately and skates to „penalty box“, where she serves her 30 seconds. Her team plays in disadvantage.

9. The smooth running of the game and the observance of the rules are supervised by 3 – 7 referees and non-skating officials, the so-called “NSO”. The referees hold the following functions:

NSOs (Non-Skating Officials) are a very important part of every bout. They record the points awarded by the referees, check the time spent in the penalty box, record the penalty, … You can easily identify them as they are wearing nothing unmarked (mostly white or black) T-shirts and holding the boards with papers in their hand.

10. The last and most important point – the team with more points wins!

If you want to see everything described above in motion, check out this great video: